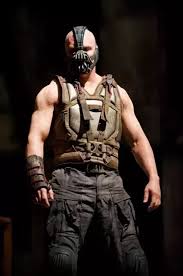 “Oh, you think darkness is your ally. But you merely adopted the dark; I was born in it, molded by it. I didn’t see the light until I was already a man, by then it was nothing to me but blinding!”

Let’s get something out of the way. Edward Thomas “Tom” Hardy, Commander of the Most Excellent Order of the British Empire, absolutely killed the role of the Batman villian in “The Dark Knight Rises.”

However, let’s break down the character’s actions. Bane, the new head of Ra’s Al Ghul’s League of Shadows, may be armed with the dictionary of Stephen A. Smith, but he is very Skip Baylessian in his thought pattern.

Bane makes numerous missteps in the movie to allow a broken down Batman to win. After Bane single-handedly defeating the Bat by breaking his back, he places Batman in the same underground jail Bane came from, affectionally called “The Pit”.

The Pit is called “Bane’s Prison” by the inmates. The prisoners will keep Bruce in line and will stop him if he tries to escape. Oh wait. They synchronize chant and cheer on Bruce three times as he makes the attempts to escape.

Bane wears a respiratory mask due to a riot in The Pit from his inmate days. Luckily, a prison doctor was able save his life. Genuis Bane decides to place Bats in the cell next to that same doctor. The doctor ends up fixing Batman’s back and helps him escape. Cannot make this up.

Bane knows escape from The Pit to be very unattainable, but still possible. He has seen Ra’s Al Ghul’s daughter make the climb to the outside when they were both prisoners in the same jail. Bane decides to leave behind zero above ground sentry to make sure Batman will not attempt escape until Bane’s five month takeover of Gotham is complete.

Astonishingly, Bane has zero inside men inside his own prison to let him know Batman has escaped and is heading back to Gotham to stop him.

After Bats goes back home and defeats Bane in combat, a plot twist is revealed. The daughter of Ra’s, Talia Al Ghul, is actually the head of the League of Shadows and she is out to get revenge for her father’s death from the first Nolan Bat movie. Bane is just a top lieutenant along for the ride.

Allow me to be blunt. Bane is a poetic henchman lacking in critical thinking. The earlier victory over Batman had defeated Bane. Looking back at the movie, it was actually Bane who turned on the auto pilot, detonating Ra’s Al Ghul’s destiny.

The Art of Trolling