Who Ran the Decade Drake or Kendrick 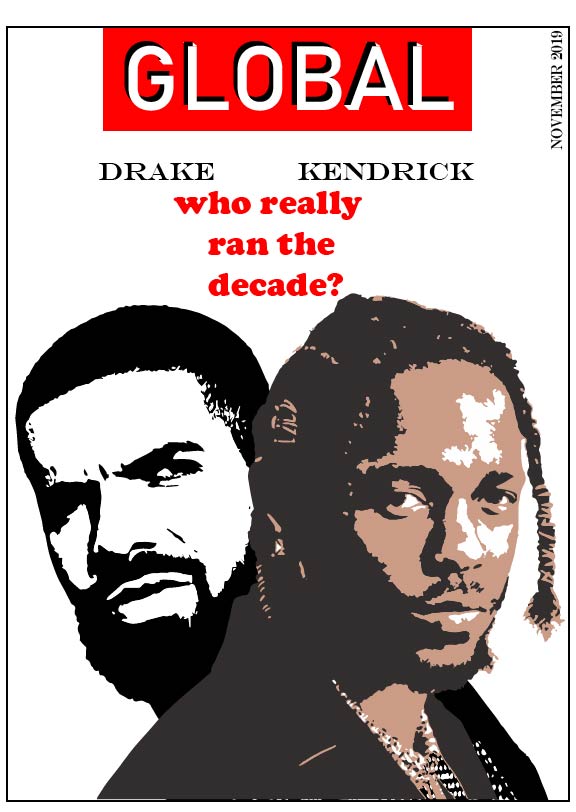 When we speak about the best in a certain area, there seems to always be a rivalry of some sorts in that area. We can go back to Magic and Larry, Kobe and Duncan, hell, Tom brady and Manning. The point is, with greatness arises challenges. If you’re in the lead of something, you got to work 3 times as hard because the person that is not in the lead is thinking to double your work. That type of mentality is something that the greats have and it was obvious with this past decade of hip hop. There have been a lot of great artists to bless our ears these past ten years such as Big Sean, Big Krit, Rhapsody, j Cole, just to name a few. But the two that stood out are course the biggest names in the hip hop industry. Drake and Kendrick Lamar.

Everyone knows that we all aren’t going to have the same opinion as the next person and the Kendrick v Drake debate is no different.

As with Drizzy I feel as if he is like a fire pair of retros that have been released 8 times and kendrick is that holy grail that rarely comes out. Is overstatraion a bad thing when majortiy of the music that a person put out good? Maybe not, but is it as special, maybe not. Over the past decade we’ve seen Drake break multiple records and become the biggest artist in our culture. We’ve also seen Kendrick break multiple records and seemingly charted “conscious” rap to the mainstream.

There was no question from the beginning of the decade, we knew Drizzy would be a huge star. Maybe there isn’t a better line that prophesied this then his witty and yet overconfident line “Buzz so big, I could prolly sell a blank disk”. Today, that buzz has grown larger than one could imagine. Having the machine that’s known as young money backing him as well didn’t hurt either. Drake’s acceptance within the lyrical community and also the mainstream/pop community, which is an anomaly in itself, was at it highest once he dropped the surprise 2015 mixtape “If you’re reading this now, it’s too late”. It was solidified, he was the best in the game. No one was dropping quality bars and great songs at such a neck break speed such as mr Ovo himself at that time. It was until the day Meek Mill cast that stone and revealed that Drake didn’t write his own bars that made Drake’s acceptance within the lyrical community drop. Somehow in another anomaly, Drizzy came out victorious by dropping a club diss record that had everyone making the “UGH” stink face. A few years later he was tested again by a more cerebral assassin in the name of Pusha T that dropped bombshell after bombshell, including the secret child(at the time) that no one knew about. Somehow shot after credible shots, Toronto’s very own always come out unscathed, and his acceptance is higher than it’s ever been. The accolades speak for themselves.

The one man that had a decade comparable to Drake is King Kendrick. The 5’4 lyrical giant was never thought to be the mega star that he is today. The weird thing about Kendrick is that he never has to deviate or sacrifice who he is to make a record with a message turn into mainstream record. “How y’all let a conscious n****a go commercial, While only makin’ conscious albums?” It seems that he’s shooting free throws on a fisher price hoop every time he drops. Which may be the one knock is that we only get to hear Kdot once every 3 years. But when he does drop, he shakes the game. Each album that he dropped is damn near a classic album. (if you need help figuring out what makes a classic album, check out YTG Blogger Ricky Williams’ blog on what makes a classic album). The awards are just thrown at him. Not to mention He was awarded the Pulitzer Prize for Music,[4] the first non-classical or jazz work to win the award. And Dare i sprinkle a little Control verse on top. Kendrick is undeniably the best rapper in the game but did he run the decade?

For me, I feel as if Drake ran the decade. The reason why I give Drake the slight edge is because of the amount of guest features and the amount of up and coming rappers he helped give a boost to. Definitely a close call but also the amount of music Drake put out is a nice plus as well.