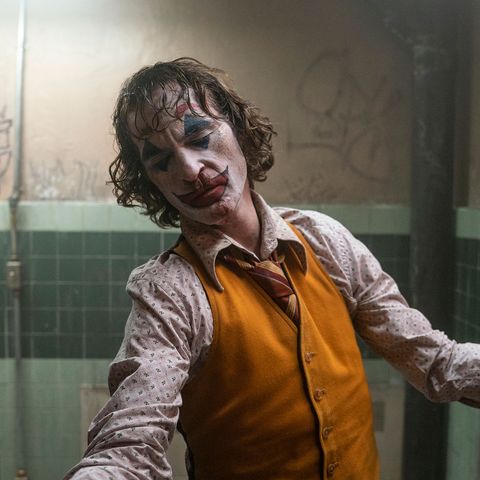 When you read this blog, can you read it in the Joker’s voice . Now I dare you to tell me you didn’t read this in the Joker’s Voice. The hype was real for this movie but did it live up to it is the question. The hype was the reason I had to see it on premise weekend. Going into the movie, I didn’t expect much from a DC movie. Im hitting the Iron Man eye roll

as the first part of the movie goes on. Maybe I was just being pestimitic because of the prior films that the company has put out in the past. Cringy is the word I would use to describe the feeling I had of watching the beginning. It really reminded me of the climate of the United States right now. Maybe the hype comes from the ability to relate to the people of the movie. As the movie goes on, I find myself starting to root for the Joker. I felt sadness for him. It was clear that everything around him was the reason for pushing him to the brink of insanity.

The arc of this story makes the cringe feeling i had eailer turn into goosebumps, and it wasn’t one moment of goosebumps, it was multiple moments that had goosebumps crawling through my body. A definitely must see, but I will not be a prisoner of the moment and say that this was the best movie of the year yet when Endgame gave us “On your left!”. This is a bright spot for an alling franchise, but if the DCCU chooses to continue to go the R rated dark rout w/ good continuity like their comics, there might be a possibility for the DCCU to become just as great as the MCU. In the end, we, the fans, would all be the winners.

The Art of Trolling